Not to be confused with the Nerf Action Crossbow.

The Crossbow is a Zuru blaster that was released in 2017 under the Bug Attack series.

The Crossbow is a pump-action string-powered blaster that is similar to the Nerf CrossBolt. It is clip-fed and has a clip release located on the left side of the blaster. The blaster can store six darts, with three dart slots on each bow arm.

The packaging for the Crossbow. 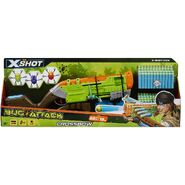 The value pack for the Crossbow.
Add a photo to this gallery

Retrieved from "https://nerf.fandom.com/wiki/Crossbow_(Bug_Attack)?oldid=183922"
Community content is available under CC-BY-SA unless otherwise noted.