The Covert Squad is a Buzz Bee blaster that was released in 2018 under the Air Warriors series. It requires three "AA" batteries for its integrated radio to be operated.

The Covert Squad is a bolt-action blaster similar to previous Buzz Bee blasters, such as the Carnivore and the Predator. It features an integrated shoulder stock and an accessory rail.

Its main feature is its walkie talkie integrated into the shoulder stock. This includes a push-to-talk button, a power switch, a two-channel selector, an integrated speaker, and a 3.5mm headphone jack, which the included earbuds can be plugged into. With headphones plugged into the jack, sound will come through those instead of through the speaker; the speaker itself is poor quality and any messages received through it will be muddled and hard to make out. Like other walkie talkies, the Covert Squad will cause feedback if two blasters are too close together.

The Covert Squad was first shown off at the 2018 New York Toy Fair. 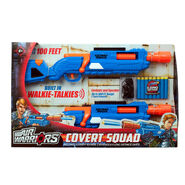 The packaging for the Covert Squad.