The Courage Crossbow is a Nerf blaster that was released in 2015 under the Secrets & Spies sub-series.

It comes packaged with two arrows and instructions.

The Courage Crossbow is a bow-like blaster that fires arrows. It does not feature the use of a plunger system and is instead powered by an elastic cord attached to the front bow arms. It features a tactical rail on top of the blaster and a strap point under the back end of the blaster as well. There is also one arrow holder under each side of the bow arms.

A reshell of the Courage Crossbow was released in 2018 as the Zombie Strike Wrathbolt.

To reload the Courage Crossbow, pull back the elastic band until it snaps into a locked position near the end of the blaster. Load in a single arrow, so that the fins of the arrow are sticking out of the slits in the shell. Make sure the arrow is seated properly, so that it will stay in position when the blaster is moved or aimed around.

Pull the firing trigger to fire an arrow. 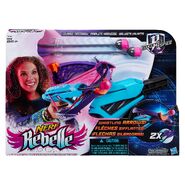 The packaging for the Courage Crossbow.
Add a photo to this gallery

Retrieved from "https://nerf.fandom.com/wiki/Courage_Crossbow?oldid=183907"
Community content is available under CC-BY-SA unless otherwise noted.