The Commandfire is an Adventure Force blaster that was released in 2018. It requires six "AA" batteries to be operated.

It comes packaged with eighty Super Darts and instructions.

The Commandfire is a fully-automatic flywheel system blaster. It features the use of an integrated hopper which holds up to forty darts at a time. The access door for the hopper features an "accordion"-style follower that expands to assist feeding when the door is closed. The door also notably has a lever-style lock which holds it in place when in use. It can also fold back further to expand the hopper space, to make loading darts into it easier. The blaster can be fired with this door open, but this can cause feeding problems, without the follower assisting how darts feed down.[1]

An additional forty darts can be stored in a large storage compartment atop the muzzle. A large gray door slides out of the way to open up the access hole.

It has two sling points: one built into the muzzle and just above the firing trigger.

The Commandfire uses both a conveyor system and pusher mechanism as its feeding mechanism. 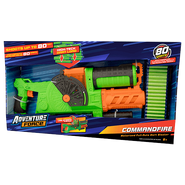 The packaging for the Commandfire. 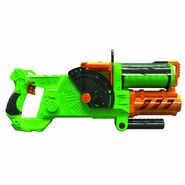 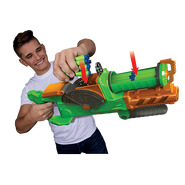 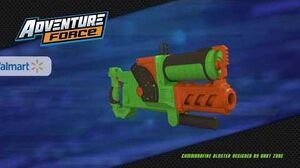