The Commander RD-6 is a Nerf revolver blaster that was released in the fall of 2020 under the Elite 2.0 series.

The Commander is a six-dart revolver-style blaster that shares numerous similarities with blasters such as the Maverick REV-6 and Disruptor. A key difference between these blasters however is that the Commander features far more attachment points than the other two, resembling both the N-Strike and N-Strike Elite Spectre REV-5. The Commander has slam-fire capabilities.

A barrel extension attachment point is present in front of the Commander's rotating cylinder, and above and below said cylinder are two tactical rails for each spot. Under the handle guard of the Commander is yet another tactical rail, and behind the sliding bar is a stock attachment point. The blaster also features a sling point below the cylinder. 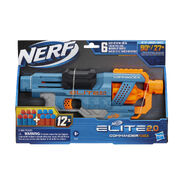 The packaging for the Commander. 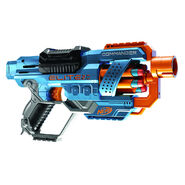 A 3D render of the Commander.