The Combow is a two-in-one Nerf blaster that was released in August of 2017 under the AccuStrike Series.

It comes packaged with eight AccuStrike Darts and instructions.

The Combow itself is two blasters in one, which can be used as two separate blasters: a blaster and a bow. The blaster acts as a standard Nerf blaster, with a priming rod and firing trigger; the bow acts similarly to other modern bow-style blasters, such as the N-Strike Blazin' Bow.

The Combow's main feature is its ability to be equipped together to form the titular blaster, creating a two-part crossbow-style weapon.

The blaster half of the Combow features an integrated shoulder stock and a single tactical rail; at the back end of the tactical rail is a set of retractable plastic nubs, which locks the bow half into place. A small link slide lever behind these nubs retracts them, allowing the user to unequip the two halves for separate use.

The bow half of the Combow features a reverse tactical rail, which allows it to be attached to blasters, although it is best to attach it to the blaster.

Both halves feature the use of intelligent air restrictors, allowing a single dart to be fired from any loaded barrel.

The Combow was first announced at the 2017 New York Toy Fair.

To reload the blaster half of the Combow, load up to four darts in its muzzle. Pull back the priming rod to prime the blaster. Pull the firing trigger to fire a dart.

To reload the bow half of the Combow, load up to four darts in its muzzle. Pull back the handle and release to fire a single dart. 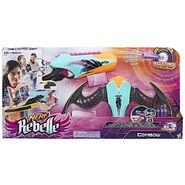 The packaging for the Combow.
Add a photo to this gallery
Retrieved from "https://nerf.fandom.com/wiki/Combow?oldid=177023"
Community content is available under CC-BY-SA unless otherwise noted.