The Codebreaker Crossbow is a Nerf blaster that was released in 2015 under the Secrets & Spies sub-series.

It comes packaged with seven Collectible Darts, one Message Dart, a message decoder, and instructions.

The Codebreaker Crossbow is a string-powered blaster that holds up to eight darts in its cylinder. Its cylinder advanced when the blaster is primed, even if it is already ready to fire. The cylinder can also be manually advanced for reloading purposes. The top of this blaster is equipped with a tactical rail.

The blaster's main feature is its lock feature, located on the blaster's right side. It prevents the blaster from being fired unless its passcode is entered. While the code has three digits, however, the only digit that needs to be set to unlock the blaster is the second, middle one. 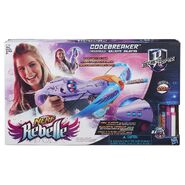 The packaging for the Codebreaker Crossbow. 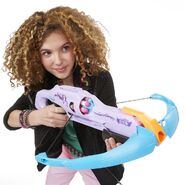