Not to be confused with the Elimination Game.

The Clue Elimination is a Hasbro blaster set that was released in 2012.

Clue Elimination is a blaster set and game based off of the classic board game Clue.

The included darts have a "?" logo on their tips in place of the Nerf logo on standard Whistler darts. The hole in the tip is somewhat larger as well, and makes a slightly higher pitched sound. The foam of the dart is a very dark orange, almost red, and is denser than that of a Whistler Dart, almost like that of an Elite Dart.

The Clue Elimination game was first unveiled at the 2012 Toy Fair.[1] The blasters seen at this event differed significantly from the final production blasters. 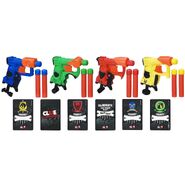 The included blasters and darts. 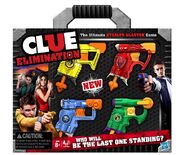 The prototype design of the Clue Elimination game.