The Clipfire is a BOOMco. dart blaster that was released in 2014.

The Clipfire is a small pocket blaster. It features a folding handle reminiscent of early Rip Rockets blasters, as well as a single dart holder above the blaster; it also has a built-in carabiner in the priming rod, which allows the blaster to be attached to bags or other carrying objects.

It has an advertised firing range of up to sixty feet (eighteen meters).[1]

The Clipfire has been released with the following color schemes:

The Clipfire has been packaged with multiple blaster sets. One was included in the Epic Blast Pack alongside the Twisted Spinner and the Farshot; two were included in the Head-to-Head Blaster Pack. 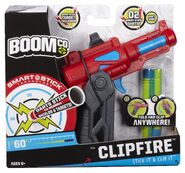 The Clipfire with its handle folded up.

The blue Clipfire.
Add a photo to this gallery

Retrieved from "https://nerf.fandom.com/wiki/Clipfire?oldid=183762"
Community content is available under CC-BY-SA unless otherwise noted.