The Clip Shots Fast and Furious is a Total X-Stream Air blaster that was released in 2007[citation needed]. It requires three "AA" batteries to be operated.

The Clip Shot is a battery-operated clip-fed blaster with two barrels and clip-loading ports. Clips are loaded into the blaster horizontally, with both wells stacked on top of each other.

Despite it being a flywheel blaster, the Clip Shot has a pump-action mechanism that pushes the darts forward through the wheels themselves; pulling back the trigger only spools up the flywheels for use. When the blaster is pumped, the dual barrels pulsate alternately. This does not match up with dart fire however, as the blaster will fire and cycle through the top clip first before switching and firing from the second clip.

The Clip Shots Fast and Furious was later re-released as just the Clip Shot.

It would be re-released and re-branded twice, first as the Air Zone Dual Shot, and second as The Corps! Twin Shot.

The Clip Shot has been released with the following color schemes: 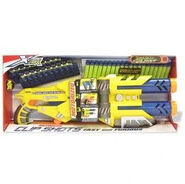 The packaging for the Clip Shots Fast and Furious. 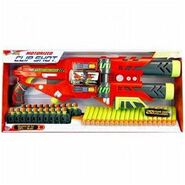 The packaging for the Clip Shot. 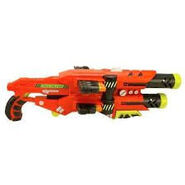