The Clampdown is a Nerf blaster that was released in 2016 under the Zombie Strike series.

The Clampdown is essentially a re-shell of the Jolt EX-1. It is advertised as being made out of "ordinary workshop tools" and that it is designed for stealth. It appears to be made out of a clamp, hence the name Clampdown. It also has a small tactical rail on the top of the blaster. 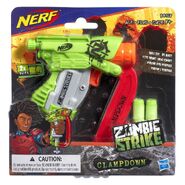 The packaging for the Clampdown.
Add a photo to this gallery
Retrieved from "https://nerf.fandom.com/wiki/Clampdown?oldid=183729"
Community content is available under CC-BY-SA unless otherwise noted.