The Chainsaw, also known as the Z-Chainsaw, is a Nerf-branded Perpetual Play Group foam weapon that was released in 2014 under the Z.E.D. Squad sub-series.

The Chainsaw is a foam weapon designed to resemble a chainsaw. This is the first foam melee weapon to integrate a reverse tactical rail mount and sound capabilities. The Zombie Strike logo is seen on the blade of the saw. The green button in the center of the saw activates the sounds. Several tally marks are seen on the side. Its reverse tactical rail allows it to be attached to blasters as a melee weapon underneath the barrel, similarly to a bayonet.

The Chainsaw was one of several melee weapons released in the summer/fall of 2014 along with the 2x4, Crowbar Combat Kit, Hammer Combat Kit, and Z-Wrench Axe. It was first discovered in stores in July of 2014.[1] 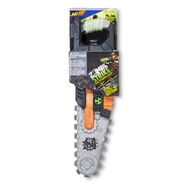 The packaging for the Chainsaw. 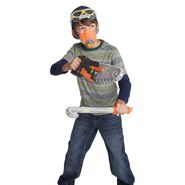 A Nerf model with the Chainsaw and the full Crowbar Combat Kit.
Add a photo to this gallery

Retrieved from "https://nerf.fandom.com/wiki/Chainsaw?oldid=183683"
Community content is available under CC-BY-SA unless otherwise noted.