The Centurion is a Nerf blaster that was released on August 1, 2013 under the N-Strike Mega sub-series.

It comes packaged with a six dart clip, a Bipod Stand, six Mega Darts, and instructions.

The Centurion is a clip-fed bolt-action blaster. Its barrel requires assembly and is included separately in packaging; despite this, it is not meant to be removed like a barrel extension accessory once attached. Similarly, the bolt handles must be attached for use as well. It features an integrated shoulder stock. A translucent jam door is located in front of the bolt, and provides access to jammed darts. Above the trigger well are priming indicators, which change color in order to indicate to the user that the blaster is primed and ready for use. A set of iron sights may help the user aim the blaster.

The Centurion's priming mechanism is different when compared to other clip-fed blasters. In an idle, un-primed position, the Centurion's bolt stays in the rear, allowing the clip to be removed easily. When the priming handle is pulled to the rear and returned to the front, the bolt comes forward and chambers a dart. When the firing trigger is pulled, a dart is fired, and the bolt violently snaps back to the rear position, creating a recoil-like effect. This may confuse users who have used a traditional clip system blaster in the past, as they may attempt to remove the clip after pulling the bolt handle back.

It is advertised to have a firing range of one hundred feet (thirty meters). There is a disclaimer on some of the promotional artwork for the Centurion stating: "Not all Mega Centurion blasters in all markets fire up to 100 feet." This issue may be similar to how N-Strike Elite blaster firing mechanisms were weakened for release in other countries due to foreign safety laws.

The Centurion was initially revealed by online blogger My Last Dart in March of 2013.[1]

The Centurion was originally known during prototype stages as the Javelin and the Ranger One, according to The Ultimate Nerf Blaster Book. In this stage, it was going to be released under the N-Strike Elite line and featured the standard blue, white and orange N-Strike Elite color scheme. Interestingly, the blaster would have had the ability to hold another clip nearby the stock of the blaster, and also had an extendable monopod.[2]

The Centurion is considered a successor to previous, shorter-ranged but similar sniper-style blasters like the 2010 LongStrike CS-6 and the 2006 Longshot CS-6. Not long after its debut, there were reports detailing complaints about the Centurion, mainly concerning the priming mechanism.

Strangely, the Centurion was never sold in certain locations such as Portugal. Despite this, Portugal did receive the Magnus, with the Magnus being the first N-Strike Mega product sold there.[3]

In 2014, the Centurion was re-released under the Sonic ICE series.

The Centurion was spiritually succeeded by the Thunderhawk in 2018.

The Centurion has been released with the following color schemes:

The Centurion uses a reverse plunger system. The priming bolt slot in the side of the blaster is almost half the length of the blaster itself, indicating that this blaster has long priming travel. It features a two-foot plunger tube.

The front barrel attachment of the Centurion is designed to be a permanent fixture; ergo, the blaster is not meant to be loaded without it. However, the clip lock can be temporarily bypassed by depressing a spring mechanism ahead of the clip well, then loading the clip. Additionally, that mechanism can be cut out by drill or dremel for a more permanent solution.

As a further result of the forced barrel lock, transporting the Centurion can be cumbersome. However, with some patient disassembly, two sprung clamps in the barrel attachment and two more in the main blaster can be removed. This allows quite easy removal and replacement of the front piece. Enough friction remains that the attachment should not fall off during typical play. The surgical procedure is best done right after purchasing new and before snapping the front piece into place, although a butter knife can help post-factum. 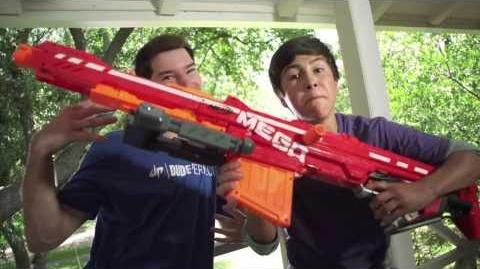 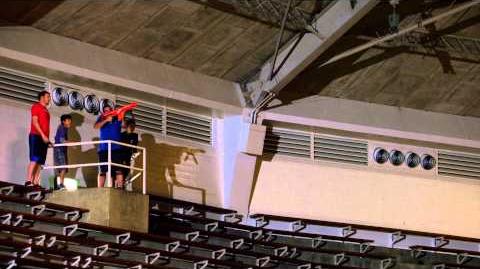 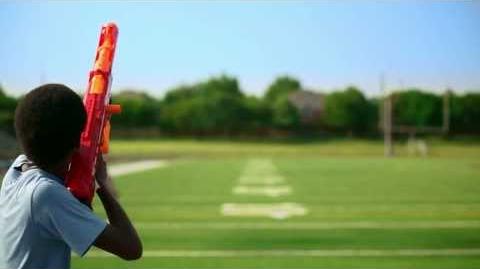 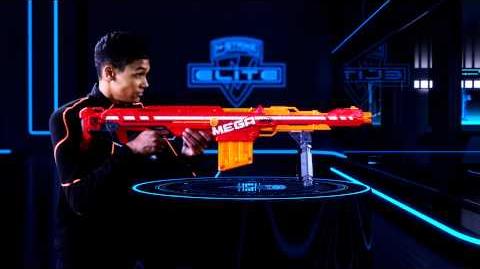 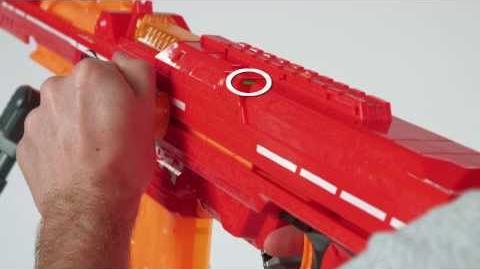