The Cataclysm is an Adventure Force blaster. 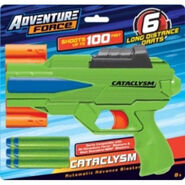 The packaging for the Cataclysm.
Community content is available under CC-BY-SA unless otherwise noted.