The Carry Case is a Nerf-branded Jazwares accessory that was released in 2017.

It comes packaged with a sling.

In its collapsed form, the Carry Case can store up to five darts on the front. If one decides to uncollapse the Carry Case, they can access other stored items, such as clips and darts. 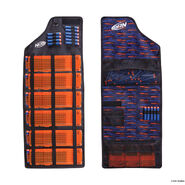 The Carry Case in its uncollapsed form.
Add a photo to this gallery
Retrieved from "https://nerf.fandom.com/wiki/Carry_Case?oldid=151431"
Community content is available under CC-BY-SA unless otherwise noted.