1 dart per 1 second and a half

The Captain Rex Blaster is a promotional Hasbro blaster that was released in 2011 to promote the Star Wars: The Clone Wars television series.

The Captain Rex Blaster resembles one of the DC-17 sidearms that were used by clone trooper Captain CT-7567, a.k.a. Rex. It is a small blaster and features a small iron sight at the top of its priming mechanism. There is a pop-out target on the back of the packaging of the blaster to assist in accuracy training, similar to the Secret Strike AS-1 and the Nite Finder EX-3.

The handle has space for two extra darts. Its reverse plunger is very small, limiting its potential range. Like its sibling blasters, the Cad Bane Blaster and the General Grievous Blaster, it is based off of the Reflex IX-1.

This blaster was available with the Cad Bane Blaster in a two-pack.[citation needed] 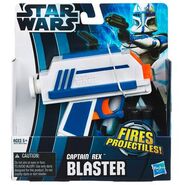 The packaging of the Captain Rex Blaster.
Add a photo to this gallery

Retrieved from "https://nerf.fandom.com/wiki/Captain_Rex_Blaster?oldid=183672"
Community content is available under CC-BY-SA unless otherwise noted.