Nerf Wiki
Register
Don't have an account?
Sign In
Advertisement
in: Products marked as discontinued by Amazon, Hasbro blasters, Nerf blasters,
and 9 more

The Cam ECS-12 is an electronic clip system Nerf blaster that was released in fall of 2014[1] under the N-Strike Elite series. It requires four AA batteries to operate the blaster; an additional four AA batteries are needed to power its camera.[1]

The Cam ECS-12 is a flywheel clip system blaster, featuring the use of an acceleration trigger. It features two tactical rails and two sling points. However, its namesake feature is its integrated camera fitted above the top of the blaster, which allows users to take first-person view videos during Nerf wars. There is a built-in stock at the back of the blaster which is non-adjustable, as well as a foregrip in the front of the blaster behind the lower tactical rail. The blaster has Elite XD capabilities which allow it to have an increased range.

The Cam's built-in camera is a small 0.3 megapixel[1] camera that can take either photos or video; videos capture at twenty frames per second. The screen itself is built above the triggers. The 1.77 inch screen shows a crosshair, possibly as a means of aiming, that will not show in video or photos taken by the camera.[1]

Buttons in front of the screen allow for the user to quickly change from taking photos to capturing video. Users can also navigate through, play back, and delete their photos or video. The button used for taking a photo or starting/stopping recording video is located on the left side of the blaster, near the front of the gray grip. An orange shade for the screen comes detached from the blaster due to packaging; it can be attached to the top of the screen to prevent sunlight glare on the screen.

The SD card slot is located just below the button dashboard.

The footage of the camera is poor, even by the standards of cell phones from the early 2000s; the framerate of the camera is far below that needed for action sports such as Nerf wars. Audio quality is also reported to be very poor. Revving the blaster (which is necessary to firing the blaster) results in a deafening, painful noise in the recorded footage.

The Cam ECS-12 was first announced by Engadget on January 27, 2014; this may have been a potential leak, according to the image's file name.[3] It was then believed to be the same unknown blaster spotted by blogger UK Nerf as a secret blaster at the UK Toy Fair. It became the first blaster to have a built-in camera.[1]

Initially advertised to fire up to ninety feet, the Cam was almost immediately met with backlash from Nerfers due to its high price.[4] Nerfers also began noticing that the specs on the camera included with the blaster were not particularly powerful for a blaster of such a high price.[5]

The blaster made an appearance at the 2014 Toy Fair.[6] The Cam was met with the harshest criticism yet upon unveiling, with the NIC seemingly having a unanimous disapproval of the blaster.[7][8] Criticism spread even further after it was discovered that Nerfers could purchase a Stryfe and a small camera for much cheaper than the Cam ECS-12 without that much of a performance difference.[9] 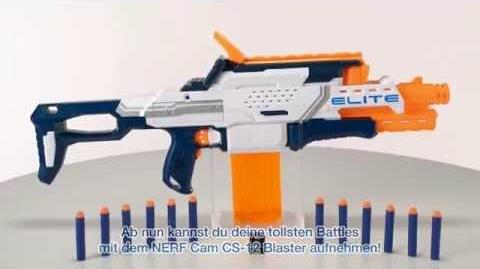