The Buzzsaw (known as the Tornado in Mexico) is a Nerf ball blaster that was released in 2006 under the Ball Blasters series.

The Buzzsaw was the largest out of the Ball Blasters blasters. Ballistic Balls are fed through the top of the blaster by means of a tube, which also functions as a ball storage device. The Buzzsaw's firing mechanism is a manually-powered flywheel located inside the blaster, which makes some noise. When a ball comes in contact with the spinning wheel, it will be launched out from the blaster.

It is essentially an updated version of the 1995 Nerf Action Ripsaw; it is quieter than the Ripsaw, which is known for being incredibly noisy. The only other difference, apart from some of the shell moldings and color schemes, is the fact that the Ripsaw only holds three balls, while the Buzzsaw holds four.

The Buzzsaw was first spotted in stores in December 2006 alongside the re-release of the Reactor.[1] 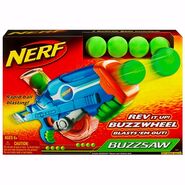 The packaging for the Buzzsaw. 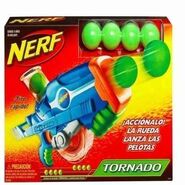 The packaging for the Tornado.

A top view of the Buzzsaw, showing the blue jam release switch in front of its hopper.
Add a photo to this gallery

Retrieved from "https://nerf.fandom.com/wiki/Buzzsaw?oldid=194011"
Community content is available under CC-BY-SA unless otherwise noted.