The Burstwave is a BOOMco. blaster that was released in 2015.

The Burstwave is an air-powered blaster that fires four darts at a time. It has three cylinders on its front, that each hold four darts and must be manually rotated between after use. One comes detached for packaging purposes. An accessory rail is on top of the Burstwave, as well as a strap point. There are also four dart holders on each side of the blaster.

It advertises a firing range of up to fifty feet (fifteen meters).

To reload the Burstwave, load up to twelve darts in its front three barrels. Pump the blaster three to four times to fully prime it.

Pull the firing trigger to fire a four dart spread. Manually rotate the barrels to prepare for the next shot. 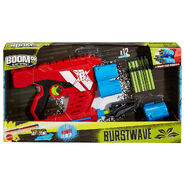 The packaging for the Burstwave.
Add a photo to this gallery
Retrieved from "https://nerf.fandom.com/wiki/Burstwave?oldid=166016"
Community content is available under CC-BY-SA unless otherwise noted.