Nerf Wiki
Register
Don't have an account?
Sign In
Advertisement
in: Under construction, Article stubs, Zuru blasters,
and 5 more

The Bug Blaster Bow is an X-Shot blaster that was released under the Bug Attack series.

The Bug Blaster Bow is a simple bow which, unlike other blasters from Bug Attack series, uses dedicated foam-tipped arrows. Each side of the grip features an X-Shot sticker.

It advertises a firing range of up to forty-nine feet (fifteen meters).

Some versions of this blaster feature three arrows with suction cups instead of Bug Blaster Bow Arrows and advertise a firing range of thirty-two feet (ten meters).

The packaging for the Bug Blaster Bow. 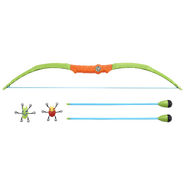 The Bug Blaster Bow and its included accessories.
Community content is available under CC-BY-SA unless otherwise noted.