Not to be confused with the BOOMco Brute Spiker.

The Brute is a Buzz Bee blaster that was released in 2015 under the Ultra-Tek sub-series. It requires four "AA" batteries to be operated.

It comes packaged with a twenty dart clip and twenty Long Distance Darts.

The Brute is a battery-operated clip-fed flywheel blaster. Unlike other modern Nerf blasters that have an acceleration trigger, the Brute has one trigger that revs up the flywheel when it is pulled halfway back. This system is very similar to that of the Automatic 20, a previous blaster that was produced by Buzz Bee. The blaster is also compatible with Nerf clip system clips and Elite Darts. Its clip release button is located under the blaster, in front of the trigger guard.

It is compatible with Nerf clip system clips and darts. 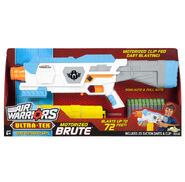 The packaging for the Brute.