The Brainsaw is a Nerf blaster that was released in fall of 2016[1] under the Zombie Strike series.

It comes packaged with eight Zombie Strike Darts and instructions.

The Brainsaw's main feature is its integrated foam chainsaw blade; despite its appearance, only the end of the saw blade is foam (similar to the Crosscut).[2] The rest of the blade that extends into the blaster's shell is plastic. It has a large handle to accommodate the chainsaw feature. It has one tactical rail on the right side of the blaster at an angle. There are also three strap points: one above the foam sawblade, one on the back end of the blaster, and one built into its bottom handle.

It features the use of a smart air restrictor system that allow darts to be fired from the blaster despite which barrels they are loaded into. This blaster also holds the ability to be slam fired. It bears similar appearance to the Rough Cut 2x4, however, it only has one plunger tube and fires exclusively in single-fire.

The blaster's blade can be revved by pulling on its orange starter handle, similar to how an actual chainsaw is started.

The Brainsaw was officially announced in January of 2016, prior to the Toy Fair of the same year. 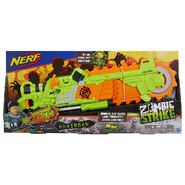 The packaging for the Brainsaw. 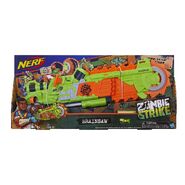 The updated packaging for the Brainsaw. 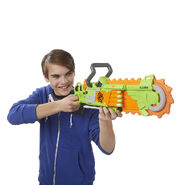 A Nerf model aiming the Brainsaw. 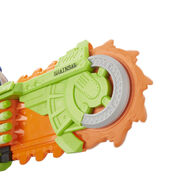 A closeup of the Brainsaw's foam sawblade.
Add a photo to this gallery 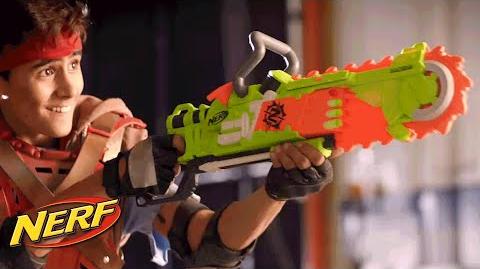 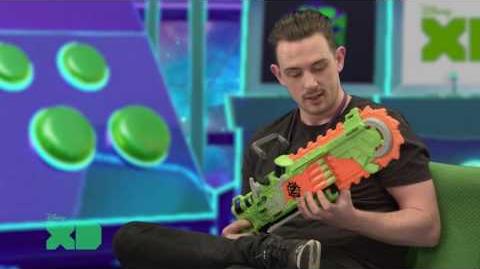 Retrieved from "https://nerf.fandom.com/wiki/Brainsaw?oldid=183610"
Community content is available under CC-BY-SA unless otherwise noted.