1 arrow per second and a half

The Bow 'n' Arrow is a Nerf blaster that was released in 1991 under the Original Nerf name.

As its name suggests, the Bow 'n' Arrow heavily resembles a bow. It has fake bow strings that are there for aesthetics only. It does not feature a firing trigger. Instead, it is fired similarly to an actual bow. Two arrow holders are located on the upper limb of the blaster. The blaster also has a built-in sight located above the barrel.

The Bow 'n' Arrow was the first Nerf blaster to fire arrows. It was invented by Mark Rappaport and was shown off at the 1991 New York Toy Fair.[2]

Its packaging was updated for 1992, and was re-released with a new color scheme in 1993. It was re-released again in 1994 as the Sonic Stinger Bow 'n' Arrow, in which fired arrows with plastic buzzing tips. It was also sold in 1994 as part of the Gotcha brand as the "Super Bow & Arrow".

The blaster was said to have been given a re-release in 1997[citation needed], although it is unknown if any performance differences occurred with this re-release.

It was spiritually succeeded by the Big Bad Bow in 1998.

The Bow 'n' Arrow has been released with the following color schemes: 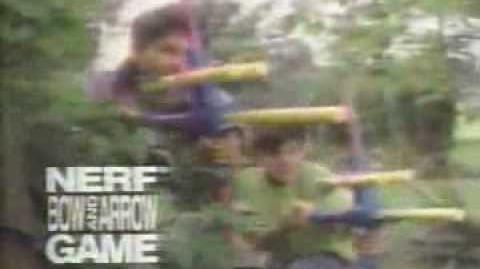