The BowStrike is a Nerf blaster that was released in spring of 2016 under the N-Strike series.

It comes packaged with three Elite Darts and instructions.

The BowStrike is a small blaster; its main feature are its pop-out bow arms and flip-up sight, which all deploy out when the blaster is primed and fold back onto the shell of the blaster once the firing trigger is pulled. A single strap point is located under the blaster's muzzle.

It was re-released within the year of its release as part of the N-Strike Elite line.

The packaging of the BowStrike. 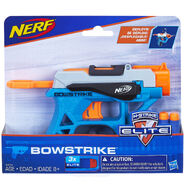 The updated packaging for the BowStrike. 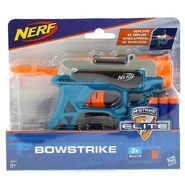 The updated European packaging for the BowStrike.
Add a photo to this gallery

Retrieved from "https://nerf.fandom.com/wiki/BowStrike?oldid=183602"
Community content is available under CC-BY-SA unless otherwise noted.