The Boom Strike is a Nerf blaster that was released in August of 2021 to promote the video game platform Roblox.

It comes packaged with two Elite Darts, a promotional code, and instructions.

The Boom Strike is a single-shot blaster based on a weapon from the Roblox game Strucid. 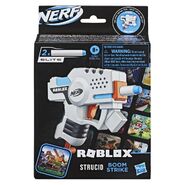 The packaging for the Boom Strike.