The Boa RC-6 is a Nerf blaster that was released in 2021 under the Alpha Strike series.

The Boa is a revolver-style blaster that features a rotating cylinder in the front that holds up to six Elite Darts at a time, and rotates on prime. In the back, there is a plunger rod priming handle similar to the ones found on external mechanism blasters.

The Boa is a re-release of the Cobra RC-6; this version of it includes the updated grip the Cobra later received.

It was first available in the Mission Ops Set; it received its own separate release later in 2021, where the blaster was given its own name separate from the Cobra.

The Boa is available in the Mission Ops Set, alongside a Big Cat DB-2 and two Slinger SD-1 blasters. 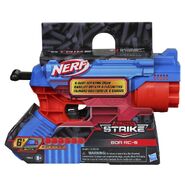 The packaging for the Boa RC-6. 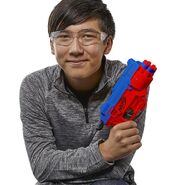 A model holding the Boa.