The Blitzfire is a Dart Zone blaster that was released in 2016.

The Blitzfire is a slide-action revolver-style blaster. The cylinder does not drop out of the blaster like some Nerf revolvers, and darts are instead loaded into the open sides. The Target Sight accessory included in the two pack can be clipped in place above the cylinder, in order to store additional ammo.

The Blitzfire was later re-released as the Blitzfire Quickshot in a single pack, without the Target Sight accessory from the original blaster set. This release also saw it packaged with Sureshot Series Super Darts, rather than original Super Darts.

The Blitzfire has been released with the following color schemes: 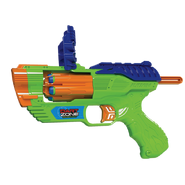 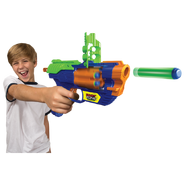 A model firing the Blitzfire.