Not to be confused with the 2003 Lanard Blast Bazooka or the 1994 Nerf Ballzooka.

The Blastzooka is a Buzz Bee missile blaster that was released in 2014 under the Air Warriors EXTREME series.

It comes packaged with two missiles.

The Blastzooka is a air-powered medium-sized blaster. It is designed to be used similarly as a real missile launcher, using the shoulder as a support. Because of that, it lacks a handle and a firing trigger, being instead fired by a small orange button located at the top of the blaster. It is pumped by a handle in its rear. A single strap point is located behind the muzzle.

The Blastzooka has been released with the following color schemes:

Modders love the Blastzooka for integrations due to its simple internals and power. It also can be easily rebarreled to shoot darts at incredible distances.

To prime the Blastzooka, pump the blaster up to twelve times.[1] Pumping more than that will trigger a safety mechanism that will release the air. Load a missile at the muzzle of the blaster.

Press the button to fire a missile. 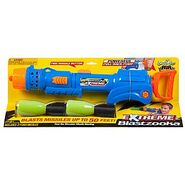 The packaging for the blue and orange Blastzooka.

The gray and orange Blastzooka.

The packaging for the gray and orange Blastzooka.

The Blastzooka's internals.
Add a photo to this gallery

Retrieved from "https://nerf.fandom.com/wiki/Blastzooka?oldid=183588"
Community content is available under CC-BY-SA unless otherwise noted.