The BigShock is a Nerf blaster that was released in 2015 under the N-Strike Mega sub-series.

The BigShock is essentially an N-Strike Mega version of the Jolt EX-1. It features a single dart holder on top of the blaster; this dart holder doubles as an integrated sight as well. The sight is blocked when a dart is placed in. Although its stock images use an orange trigger, the final product has a gray trigger instead.

Unlike earlier blasters, the grey trigger does not indicate weakened performance, as all BigShock blasters include it. This version was released worldwide.

The BigShock was the first N-Strike Mega blaster to be released. The original version, based off of the first two leaked images, used a much darker orange for the muzzle and handle.

It was discovered on September 1, 2014 alongside a large amount of other blasters when a photo at a Chinese conference detailing a large portion of the 2015 line was disclosed by Urban Taggers, the biggest Nerf leak yet.[3] Within a few days Hasbro employees had photos of the 2015 blasters removed. Translations and conversions led to the price estimate of the BigShock to be approximately 10.00 AUD.[4]

One confusing detail about the history of the BigShock is its name; for unknown reasons many referred to this blaster as the "BigShot". The original leaked image referred to the blaster as the "BigShot", although an image leaked the same day of the blaster's packaging revealed the title to be "BigShock".[5] For weeks after this the blaster was still referred to under both titles.[6] Assuming that BigShot was the original intended name, it was most likely changed due to difficulty trademarking the name since it is a common-use phrase.

The BigShock features rather high modding potential for a Jolt-based blaster. The blaster comes apart when the shell plates are removed to reveal a much more compact blaster.[7] From here, air restrictor removals and spring replacements can be done with ease as well as rebarreling. Due to the larger barrel to accommodate for larger darts, one will not have to remove the original barrel when rebarreling; simply sliding the replacement barrel into the blaster will suffice with some extra sealant (e.g. grease and tape).

The aftermarket company Worker has made barrel inserts for the BigShock that decrease its inner diameter, allowing it to use Elite Darts. They are easily removable. It is important to note that installing these barrels will disengage the air restrictor. 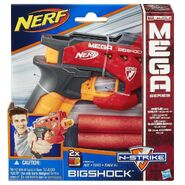 The packaging of the BigShock.

The packaging of the BigShock with the gray trigger. 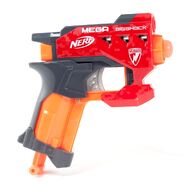 The BigShock with the gray trigger.

The BigShock without its shell compared to a Jolt. 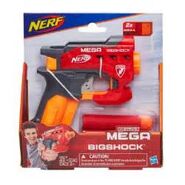 The updated packaging for the BigShock with the grey trigger.
Add a photo to this gallery

Retrieved from "https://nerf.fandom.com/wiki/BigShock?oldid=183524"
Community content is available under CC-BY-SA unless otherwise noted.