The Battle Racer is a Nerf-branded Hauck Toys product that was released in 2015.

The Battle Racer is a pedal-powered go kart. There is space to store ten darts at the front of the kart, in addition to spots to hold two blasters. In the back, behind the chair, there is another set of two blaster holsters. The arm rests are also capable of holding several Elite Darts each. The seat can be adjusted to suit various sizes.[2]

The Nerf logo is plastered several times throughout the body of the kart, including the front, the chair, the sides and the center of the kart. A brake system is seen at the side of the kart in the event that the kart needs to be slowed down. It is capable of holding children up to 110 lbs.[4]

The Battle Racer has some questionable build quality issues. As a Nerf product produced by a company other than Hasbro, build quality is not going to be at the same level as other Nerf products. However several users on online shopping sites have reported some errors in quality control. The Battle Racer is apparently very easy to assemble, but suffers from a fragile front end piece, which is prone to detaching.[2] This issue was noted by several customers. The rubber on the handbrake was also cited as a problem area, as well as blasters frequently falling out of the holsters.[2]

The Battle Racer is the first Nerf product created by Hauck Toys. From what is known, the kart made its debut on December 16, 2015 on a number of sites including the Hauck Toys home page. It appeared at the 2016 Nuremburg Toy Fair among other public appearances. Likely because it is produced by a German toymaker, the product was first seen in Germany and Western Europe before eventually making its way to North America and the rest of the world.

The product had taken on a life of its own when it went semi-viral, allowing for several news media outlets like The Daily Mail and Gizmodo to comment on it.[5][6]

It was re-released in 2019 in a different color scheme as the Striker Pedal Go Kart. 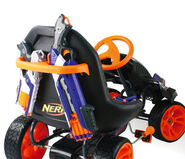 A back view of the Battle Racer.

A shot of a child riding the Battle Racer. 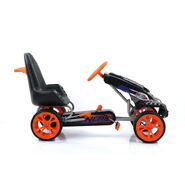 A side view of the Battle Racer.

The Battle Racer's packaging.
Add a photo to this gallery 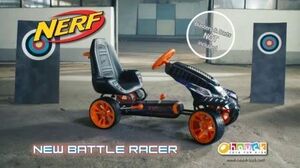 Retrieved from "https://nerf.fandom.com/wiki/Battle_Racer?oldid=183491"
Community content is available under CC-BY-SA unless otherwise noted.