The Barrage is a piston-pressurized soaker and among the first of the 2014 Super Soakers to be discovered. Its handle appears to also be part of the reservoir of the soaker, similar to that of the Helix and Vaporizer.

The Barrage has a unique type of nozzle selector, where it has a secondary piece that rotates on the inside of the outer sheath. This allows the soaker to apparently shoot from the middle of the nozzle selector. One can toggle between three settings; namely Distance, Flood, and Scatter, which can be toggled between one another by rotating the barrel of the soaker.

The nozzle is unable to cycle through all the settings in a complete revolution, and will stop once reaching either the "Distance" or "Scatter" setting. There is also no way to tell what nozzle the soaker is using because of the lack of markings on the barrel, making one have to look directly into the middle of the nozzle to check what nozzle is currently being used.

It advertises a firing range of up to thirty-eight feet (11.5 meters).

The Barrage has been released with the following color schemes: 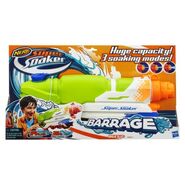 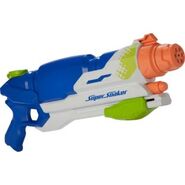 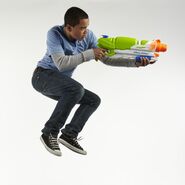 A Nerf model with the Barrage.
Add a photo to this gallery

Retrieved from "https://nerf.fandom.com/wiki/Barrage?oldid=183388"
Community content is available under CC-BY-SA unless otherwise noted.