For the 2010 Buzz Bee blaster of the same name, see Berserker.

The Barbarian is a Buzz Bee blaster that was released in 2017 under the Air Warriors series.

The Barbarian is a unique blaster that is powered by a HAMP system, rather than conventional springs, similar to the Side Winder. It features a removable forty dart section that is comprised of two twenty dart drums that rotate together via a gear system. A false trigger is located in the handle. The blaster is instead fired by priming the pump towards the user as quickly as possible. Moving the pump back will rotate the drum.

The Barbarian was first shown at the New York Toy Fair, known then as the Blizzard. The Blizzard had black drums instead of the current model's orange drums.

The Barbarian released in 2017 as the Double Drum, with a less powerful firing range. It also had a re-release that same year under the Adventure Force brand as the Decimator. 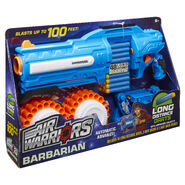 The packaging for the Barbarian.
Add a photo to this gallery

Retrieved from "https://nerf.fandom.com/wiki/Barbarian?oldid=193168"
Community content is available under CC-BY-SA unless otherwise noted.