Not to be confused with the Super Soaker banana clip.

The banana clip is a Nerf dart clip that was released in 2014.

The banana clip holds up to ten darts at a time. Like a real-life "banana magazine", it curves towards the front of the blaster; the curved part of the clip is dead space and is purely for aesthetics[1]. It has a similar appearance to that of an N-Strike six dart clip. Unlike other N-Strike Elite clips, the banana clip does not feature a transparent side. The curved shape can make it easier to hold and remove.

As with all clips, there is that a groove on the top where the dart is inserted. This can slightly deform the dart on the top, particularly if it is stored there for a long period of time.

A variant of the banana clip was released with the Doomlands 2169 Impact Zone Desolator, this time with a translucent-orange window to view the darts. 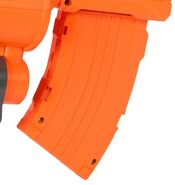 The banana clip loaded into a Demolisher. 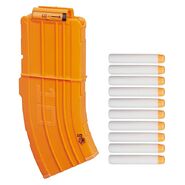 The banana clip with the ten N-Strike Modulus Elite darts it comes with when purchased off of Amazon.