Not to be confused with the Motorized Ballzooka MP150.

The Ballzooka is a Nerf ball blaster that was released in 1994 under the Nerf Action series.

The Ballzooka holds up to fifteen Ballistic Balls, with each of the five barrels on the blaster's rotating turret holding up to three balls at a time. It does not have a firing trigger and instead uses a HAMP-style grip handle to fire it.

The Ballzooka was succeeded by the 2000 Power Nerf Ballzooka MP150. It featured a slower rate of fire, but a longer firing range and much better accuracy.

It was succeeded again in 2003, by the Rapid Fire Ballzooka, renamed the Cyclotron shortly before its release. 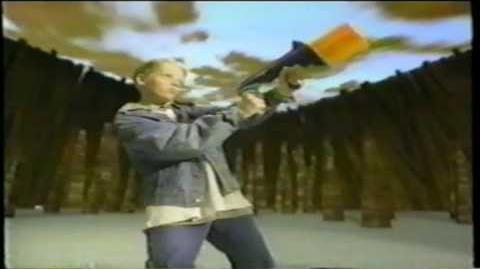