This is an article about the blaster type. For other uses, see Ball blaster.

A ball blaster is a type of blaster fires only ball-type ammunition that may vary in size.

Ball blasters do not often feature the use of a more traditional plunger system. The most popular means of firing a ball blaster is through a HAMP-style pump or a flywheel system. Other styles of blaster include slingshots, usually propelling balls through the use of an elastic cord and striker.

They are notable for having a slower firing velocity due to the soft foam ammunition they fire, resulting in lower ranges than traditional dart blasters (barring High-Impact Round blasters).

Not all ball blasters are compatible with each ball ammunition type. Various blasters may be able to fire a more standard ammo, like the older and larger Ballistic Ball-style balls, or the newer and smaller High-Impact Round-style balls.

2003 saw the release of Atom Blasters, a series consisting solely of ball blasters. A successor, follow-up series - Ball Blasters - would come out in 2005. Nerf would not produce a new ball blaster following the 2006 Buzzsaw and Reactor, shifting focus into its booming-in-popularity N-Strike and Dart Tag lines of products.

A brief resurgence of ball blasters came in 2012, following the revival of the Koosh brand by Hasbro. A new series of products, Koosh Galaxy, was aimed at a younger demographic, with softer, squishier ball ammunition being used over the classic Ballistic Ball. This series continued into 2013, even netting it a promotional cross-brand successor, Angry Birds Star Wars Koosh, with the Angry Birds Star Wars mobile game.

A new form of ball blaster was unveiled and announced at the 2015 New York Toy Fair: the RIVAL High-Impact Round ball blaster. Unlike other ball blasters in the past, especially that of the kid-friendly Koosh Galaxy, the RIVAL blasters were designed for and aimed at an older crowd, with an advertised hundred feet per second with each shot. The series has remained popular since then, going so far as to become the new standard for Nerf ball blasters.

In 2021, the Nerf Hyper line was released, a new rival-esque line of ball blasters that shoot Hyper Rounds, an ammo type similar to High-Impact rounds, but drastically smaller.

The Blast-a-Ball, the first Nerf blaster. 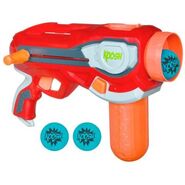 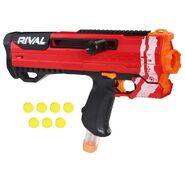