This is an article about the Lanard Ball Blaster. For other uses, see Ball blaster.

The Ball Blaster is a Total X-Stream Air ball blaster that was released in 2007[citation needed].

The Ball Blaster features an unique priming handle, which extends above the blaster and not below it. Similar to that of the Nerf Buzzsaw or Ripsaw, it has a feeding tube for Blaster Balls to be fired from. There is a hinged lid, which can close the tube to keep balls from falling out.

It advertises a firing range of up to twenty-five feet (seven meters).

The Ball Blaster was re-released as an Air Zone blaster. Two versions of the Air Zone variant exist: one retains the original name of the blaster, while the other was named the Sentry 4.

It was later re-released as the BallistX Blaster Ball Blaster.

The Ball Blaster has been released with the following color schemes: 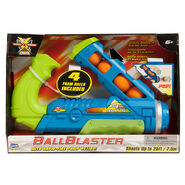 The packaging for the blue and green Ball Blaster.
Community content is available under CC-BY-SA unless otherwise noted.
Advertisement