The BASR-R is a Nerf blaster that was released in 2020 to promote the video game Fortnite.

The BASR-R is a bolt-action sniper rifle-styled clip system blaster, based on the rare Bolt-Action Sniper Rifle from the game. It has a single tactical rail on top, where the included scope can be attached. The jam door is built into the tactical rail, which hinges upwards to reveal the breech.

Under that tactical rail is the BASR-R's ambidextrous priming handle. After pulling it back, a clip can be loaded from the bottom. The firing trigger and the clip eject button is located right behind where the clip loads into. Similar to the Tri-Strike, the BASR-R has slam fire capabilities.

The packaging for the BASR-R.

The back of the packaging for the BASR-R. 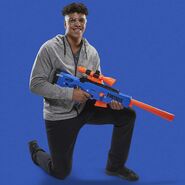 A model holding the BASR-R. 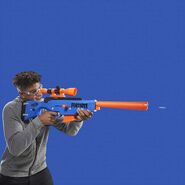 A model firing the BASR-R.
Community content is available under CC-BY-SA unless otherwise noted.
Advertisement