The Auto Tek 20 is a Buzz Bee blaster that was released in 2013 under the Air Warriors series. It requires three "AA" batteries to be operated.

It comes packaged with twenty Micro Darts and one twenty dart clip.

The Auto Tek 20 is a battery-operated flywheel blaster. It uses motors in the same fashion as the Automatic Tommy 20 and uses a similar clip to the Cougar and Jaguar. The batteries are stored in the blaster's integrated shoulder stock.

This blaster is the second largest out of Buzz Bee's 2013 line, the largest being the Side Winder.

It advertises a firing range of thirty feet (nine meters).

This blaster was released under the Air Warriors line in most of the world; some areas carry this blaster under the older Air Blasters line.

The Auto Tek 20 has been released with the following color schemes:

The Air Blasters packaging for the Auto Tek 20. 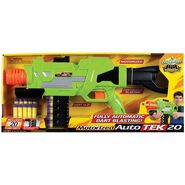 The packaging for the green and black Auto Tek 20.
Add a photo to this gallery

Retrieved from "https://nerf.fandom.com/wiki/Auto_Tek_20?oldid=183351"
Community content is available under CC-BY-SA unless otherwise noted.