The Atomizer is a Nerf ball blaster that was released in 2003 under the Atom Blasters series.

The Atomizer is the smallest blaster in the Atom Blasters line. It is a slingshot-esque blaster capable of holding up to two Ballistic Balls at once. The firing mechanism is a blue piece attached to two sides of the blaster. The piece is connected to either sides by pieces of material via string, reinforced by a layer of plastic over top of each.

It succeeded the 1992 Slingshot from the Original Nerf line and the 2001 Striker Slingshot.

During prototype stages, this blaster was known as the Sling Shot, not to be confused with the original 1992 Slingshot blaster.[1] Early production shots of the blaster showed it having a stand at the bottom and blue Ballistic Balls, neither of which made it to the final production of the blaster.

In 2004, it was re-released under the Action Blasters line.

The prototype of the Atomizer, then known as the Sling Shot.

The packaging of the Atomizer. 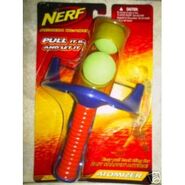 The packaging of the Action Blasters Atomizer.
Add a photo to this gallery

Retrieved from "https://nerf.fandom.com/wiki/Atomizer?oldid=206293"
Community content is available under CC-BY-SA unless otherwise noted.