Not to be confused with the Atom Blasters series.

The Atom Blaster is a Nerf ball blaster that was released in 2005 under the Ball Blasters series.

It comes packaged with one Ballistic Ball.

It is a small blaster that fires a single Ballistic Ball. It has a similar name to the Atomizer, although as a blaster, it is completely different. While the Atomizer used a slingshot-esque design, the Atom Blaster is a trigger-based ball blaster. When the ball is inserted into the blaster, the Atom Blaster is automatically cocked. This is due to the method of firing; a rubber piece the ball is placed against. Pulling the trigger of the blaster releases the rubber piece, launching the ball.

The Atom Blaster features a similar handle to what is seen on the other Ball Blasters blasters, the Buzzsaw and Reactor, as well as using a similar color scheme. On the barrel of the blaster's sides are two areas where one can rest their hands on, allowing for ease of cocking when pressing the Atom Blaster against a surface.

It was created by Barry Kudrowitz for Hasbro for his master's degree at MIT. During development, it was to be a small, palm-mounted blaster referred to as the Hand Popper, and over the various stages of development, it had been in different formats, such as a stomp grenade, a foam hand grenade complete with shrapnel, a tomahawk-thrower, and even a Super Soaker-style water blaster.[2] 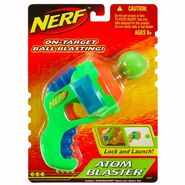 The packaging for the Atom Blaster.

The prototype versions of the Atom Blaster. 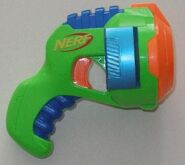