The Assault Grip is a Nerf tactical rail grip that was released in 2012 under the N-Strike Elite series.

It comes packaged with the Retaliator (as well as its Sonic ICE and Elite XD counterparts) and the Stryfe CS-18 Mission Kit.

The Assault Grip is a removable grip designed to help improve the user's accuracy. Its function is similar to that of the Stampede ECS's Pop-Out Bipod, being somewhat sturdier. It is compatible with any Nerf blaster that features a tactical rail.

Some users have experimented using the Assault Grip as a priming handle by mounting it on the top of a Retaliator, Recon, or Maverick's priming slide. This way, it can also be used as a bolt-action priming handle of sorts. It should be noted that it may slide off the priming handle when it is pushed forwards. Not to mention, the force required to prime the blasters in question may cause the handle to snap off of the rail before that.

Likewise, it can be mounted on the side of a Vulcan EBF-25 to make for a horizontal foregrip. Because the Vulcan has a tactical rail on both sides, it can be used for both left-handed or right-handed users.

The Assault Grip can also be mounted on the top of blasters (as most blasters have a top rail) to be used as a makeshift carry handle. Usually, the grip cannot support the weight of the blaster.

The Assault Grip has been released with the following color schemes:

The Sonic ICE variant of the Assault Grip. 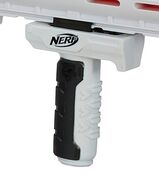 The Elite XD variant of the Assault Grip. The molded logo is painted black, unlike the other variants.
Community content is available under CC-BY-SA unless otherwise noted.