The Artemis is an X-Shot blaster that was released in 2013 under the X-Shot Girl series.

It comes packaged with two arrows.

The Stalker is an bow-style arrow blaster, similar to Nerf's Big Bad Bow. A barrel piece, that comes detached in packaging, can be removed to make the blaster more compact for storage. Its faux bow arms are also removable. After being fired, the Stalker requires its priming mechanism to be pushed forward.

It advertises a firing range of up to thirty-five feet (nine meters).

The Artemis is a re-release of the 2012 Stalker.

When the X-Shot Girl series was renamed as X-Shot Pink Series, the Artemis was re-released as the Angel Fire. 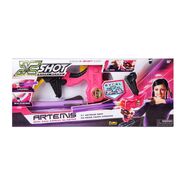 The packaging for the Artemis. 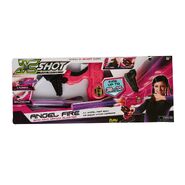 The packaging for the Angel Fire.
Add a photo to this gallery
Retrieved from "https://nerf.fandom.com/wiki/Artemis?oldid=192254"
Community content is available under CC-BY-SA unless otherwise noted.