The Arrowstorm CB-4 is a Jump Zone blaster that was released in 2011.

It comes packaged with four arrows.

The Arrowstorm is a crossbow-like blaster, with its faux bow arms are connected to the priming slide by string. It does not feature a proper handle or firing trigger, which has been replaced by a switch located on the rear of the blaster.

The Arrowstorm has been released with the following color schemes: 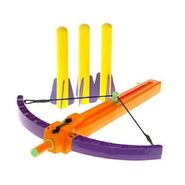 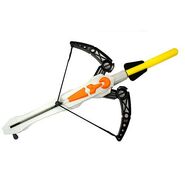 The Dart Zone Crossbow.
Add a photo to this gallery
Retrieved from "https://nerf.fandom.com/wiki/Arrowstorm_CB-4?oldid=172716"
Community content is available under CC-BY-SA unless otherwise noted.