The Arrow Revolution Bow is a Nerf blaster that was released in fall of 2015 under the Secrets & Spies sub-series.

It comes packaged with six arrows.

The Arrow Revolution Bow, as its name suggests, is a bow-action blaster. The unique thing about the Arrow Revolution is that there is a built-in, rotating quiver located on its right side. The quiver rotates via trigger; the trigger is located where a firing trigger would be on a standard Nerf blaster. There is a circular, pink aiming sight built into where arrows are loaded to be fired.

It advertises a firing range of ninety feet (twenty-seven meters). 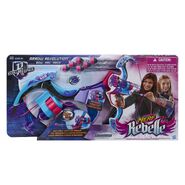 The packaging for the Arrow Revolution Bow. 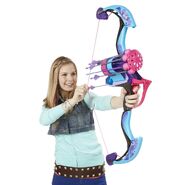 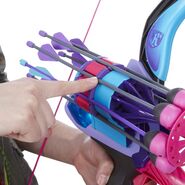 A close-up of the built-in quiver.
Add a photo to this gallery

Retrieved from "https://nerf.fandom.com/wiki/Arrow_Revolution_Bow?oldid=183322"
Community content is available under CC-BY-SA unless otherwise noted.