Not to be confused with original arrows.

The arrow is a type of Nerf ammunition that was released in fall of 2014 under the Secrets & Spies sub-series.

Unlike other arrow types, the Rebelle Secrets & Spies variant is more similar to that of an actual arrow. It features a skinny, plastic body with a rubber head and feather-shaped foam at the end of the arrow. The arrowheads are similar to that of Whistler Dart dart heads and give the arrows the ability to whistle through the air when they are fired. The Secret & Spies variations have feathers with a similar pattern to Message Darts, which allow messages to be written them and read with the transparent red parts on blasters like the Agent Bow.

The 2017 Zombie Strike Dreadbolt featured use of these arrows, branching them out from simply being Rebelle ammunition to being a more standard Nerf ammunition type.

Arrows have been released with the following color schemes:

Rebelle-style arrows are compatible with the following blasters: 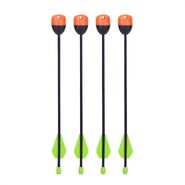 The Zombie Strike version of the arrow.