For information on the blaster's standard features, see Apollo XV-700.

It comes packaged with a Face Mask, a seven round magazine, seven High-Impact Rounds, and instructions.

The Star Wars Apollo XV-700 is meant to act as a collector's edition of the blaster, with special packaging with artwork of Star Wars character Boba Fett. The included Face Mask features a color scheme meant to emulate the helmets worn by Mandalorian warriors.

The packaging for the Star Wars Battlefront II Apollo. 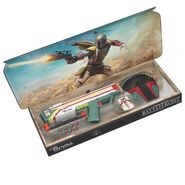 The interior of the packaging, displaying the Boba Fett art and the blaster's included accessories. 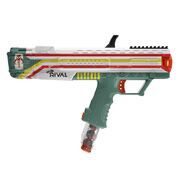 A pre-release render of the Star Wars Battlefront II Apollo.
Add a photo to this gallery

Retrieved from "https://nerf.fandom.com/wiki/Apollo_XV-700_(Star_Wars)?oldid=183283"
Community content is available under CC-BY-SA unless otherwise noted.