For information on the blaster's standard features, see Apollo XV-700.

It comes packaged with a twelve round magazine, twelve High-Impact Rounds, two team banners, and instructions.

It is a Target exclusive in the United States, but has been seen in Canadian Tire stores in Canada[1].

It is a re-release of the RIVAL Apollo XV-700, with the difference being the new Phantom Corps color scheme, and that it comes with a twelve round magazine rather than a seven round magazine.[2] 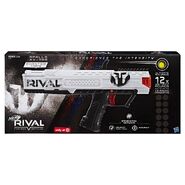 The packaging for the Phantom Corps Apollo XV-700. 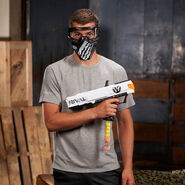 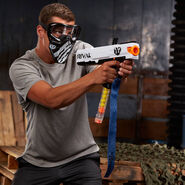 A Nerf model aiming the Apollo. 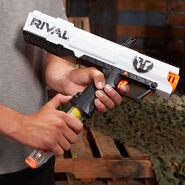 The Phantom Corps Apollo being loaded with its included magazine.
Add a photo to this gallery

Retrieved from "https://nerf.fandom.com/wiki/Apollo_XV-700_(Phantom_Corps)?oldid=205142"
Community content is available under CC-BY-SA unless otherwise noted.