Not to be confused with the 2010 N-Strike Ammo Box.

The Ammo Box is a Nerf product that was released in 2013 under the N-Strike Elite series.

It comes packaged with a hundred Elite Darts and two six dart clips.

It is a blue and white locker-esque box that can store darts and clips. Darts are meant to be stored vertically, meaning that when the box is opened, the user should be able to look down the hole inside the darts or see the tip, not seeing the sides of the darts. There are two thin straps on the sides of the box which act as handles. The box can be opened by pressing two small tabs where the top and bottom parts of the box meet in order to separate the two pieces.

The Elite Ammo Box is advertised to be able to hold more than three hundred darts. The N-Strike Elite and Nerf logos are seen in white on the top of the box.

It is a successor to the N-Strike Ammo Box.

There was a Nerf Perks exclusive of the ammo box that came with no darts of clips. 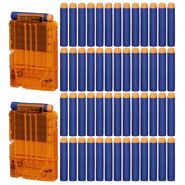 The contents of the Ammo Box.
Add a photo to this gallery
Retrieved from "https://nerf.fandom.com/wiki/Ammo_Box_(N-Strike_Elite)?oldid=191066"
Community content is available under CC-BY-SA unless otherwise noted.