Not to be confused with the 2013 N-Strike Elite Ammo Box.

The Ammo Box is a Nerf product that was released in 2010 under the N-Strike series.

It comes packaged with a hundred darts.

The Ammo Box is a locker-esque box that can store darts and clips. When the box is opened, the user should be able to look down the hole inside the darts or see the tip, not seeing the sides of the darts. There are two straps on the sides of the box which act as handles.

An N-Strike Elite version of the Ammo Box was released in 2013. 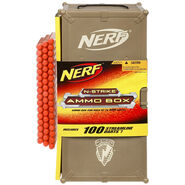 The Streamline Dart version of the Ammo Box.
Add a photo to this gallery