The Amban Phase-Pulse Blaster is a Nerf blaster that will be released in October of 2021 to promote the television series The Mandalorian. It requires two "AAA" batteries to operate its integrated lights and sounds.

The Amban Phase-Pulse Blaster is a blaster modeled after the Amban phase-pulse blaster used by Din Djarin in the show. It features an integrated scope, with internal lights activated via battery power. Batteries also operate internal sounds which activate on trigger pull.

Similarly to how the blaster functions in the show, it is a breech-loaded blaster; the breech is revealed by partially priming it, allowing the user to load and fire a single dart.

Like other promotional blasters, such as the Deadpool and Star Wars Apollo XV-700, the Amban Phase-Pulse Blaster's packaging doubles as a display case. 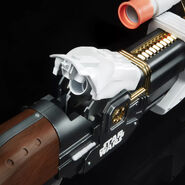 The blaster's breech open and ready to be loaded. 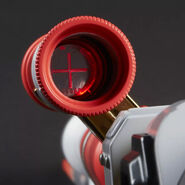 The blaster's scope, with its lights on.